4 Benefits of Fretless Guitars (And 3 Drawbacks)

This post may contain affiliate links. If you click on a link and make a purchase, we may earn a commission at no additional cost to you. Learn more.
by  Shanna | Last Updated:  Nov 08, 2022 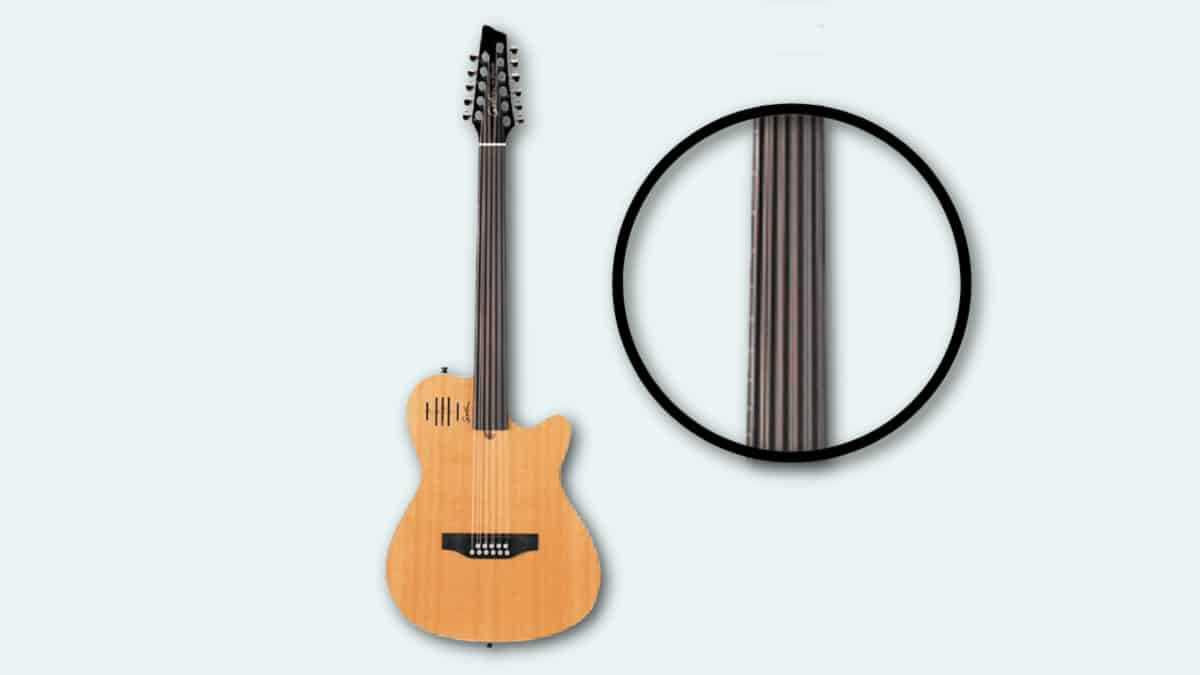 The first time I saw someone playing a fretless guitar, I was in awe. How did they know where to put their fingers? Why didn’t all guitarists play these sleek-looking instruments?

Recently, I had the privilege of playing a friend’s fretless guitar. To my dismay, I sounded awful!

I realized then why not everyone has one. They can have a beautiful sound, but they’re not easy to play.

Since then, I did some digging into the benefits of a fretless guitar.

Today I’ll share with you the basics of fretless guitars, as well as both the advantages and disadvantages.  That way, you can decide if going fretless is worthwhile for you. 🙂

How Does a Fretless Guitar Work?

On a normal fretted guitar, the fretboard is divided into sections, using frets. They’re designed to help us play within the standard musical scales.

Each fret represents one semitone (or “half step”) in a standard western scale. This makes it easy to play within the scale!

A fretless guitar doesn’t have these sections. There are no frets splitting the fingerboard into different note chunks.

Why is this important?

A Quick Lesson on Frets

When you play a note within a fret, it doesn’t matter where in the fret your finger is placed. On most frets, you have a range of about one inch in which to hold the note.

When you play a note, the string only vibrates between the bridge and the fret you’re on. It doesn’t matter where your finger is on that fret. It’s the position of the fret that matters, and the fret never moves.

But remove the frets, and every minor change in finger positioning creates a new note! So in the space of an inch, you have more than just that one A note.

When you don’t have frets, the string vibrates between the bridge and your finger. That means that every small change in finger placement changes the pitch of the note.

Do You Play It Differently?

You play a fretless guitar the same way as a regular guitar. You’ll just need to learn the right places to put your fingers.

Many newbies to the fretless guitar add markers so they have an idea of where to hold the notes. These can be removed later.

Is Playing a Fretless Guitar Difficult?

Playing a fretless guitar is as easy on the fingers as a normal guitar.

Technique-wise, you’ll need to develop a good musical ear to hit the right note without the frets guiding you.

But there’s a noticeable downside to a fretless guitar.

Playing chords is extra difficult. Instead of getting just one finger right, you need to get three or four fingers exactly in the right place.

On a fretted guitar, as long as you’re within the right fret, it will sound good.

But on a fretless guitar, your margin for error is very small. Just one finger slightly out of place will sound off-key!

4 Benefits of a Fretless Guitar

So now we know how these guitars work and who they’re best for. But what are some specific benefits of a fretless guitar?

We’ve already discussed how on a normal guitar, the fret is where the string vibration stops, causing a particular note to ring out. On a fretless guitar, it’s your finger instead of a fret.

But frets are made of metal. Cold, tough metal. Fingers are softer and warmer.

This makes for a warmer sound when the string vibrates. Many guitarists won’t notice the difference, especially when playing through a pedal with effects.

It’s more striking when playing a fretless bass guitar. The warmth pumps up the bass tone, making it more powerful.

This could be a disadvantage for those who want to play metal, or prefer a harsher, colder tone.

If you’re going to be soloing, a fretless guitar offers a smooth, uninterrupted board to move around on.

With just your fingers, you can produce a clean, silky sound similar to that of a slide guitar. There are no frets to move your fingers over, just a long, straight string on a smooth fretboard.

For accomplished guitarists, this is perhaps the biggest advantage of a fretless guitar. Without the structure and limitations of frets, you can play notes outside of the regular western musical scales.

Most guitarists will never need to move outside of regular scales. But those who are looking for a new challenge or are interested in exotic sounds may find it to be intriguing.

And this is perhaps the most practical of the benefits of a fretless guitar!

If you have one string that’s slightly out of tune, your solo may sound a little off. On a normal fretted guitar, there’s nothing you can do about this if you’re in the middle of playing.

On a fretless guitar, all you need to do is adjust your finger position slightly.

If your string is flat, moving your finger a little closer to the guitar body will find the right note.

If your string is sharp, sliding your finger a touch closer to the nut of the guitar will help you hit the proper note.

You can’t do this on a regular guitar, because the note remains the same within the fret. There are no small nuances!

Fretless guitars may sound great, but they have some significant drawbacks.

Not being able to play chords easily is the biggest disadvantage of fretless guitars.

With a lot of practice, you could do fairly well playing chords. But it’s going to take a while to learn to play single notes accurately.

Only once you can play single notes with accuracy can you move on to playing multiple notes at the same time!

Keep in mind that with a single note, you can adjust your finger quite quickly to the right position. But when you have three or four fingers on the fretboard, it’s harder to make small adjustments.

This means you most likely won’t be able to play both rhythm and lead guitar within one song. And you probably wouldn’t use this as a guitar for punk music.

You need to be extremely precise to hit the right notes.

You don’t have the inch of space that a fret offers for a single note. You’ll have a very small, precise space to hit the right note. Just a touch left or right of that will move on to a different (and incorrect) note.

If you’re playing live, mistakes can be more noticeable. But on the bright side, it’s easier to adjust quickly and get to the right note.

Guitarists & Bassists Who Use Fretless Guitars

Looking for some fretless guitar inspiration? Check out these vids of some superbly talented guitarists shredding the fretless.

Some big names you may recognize who use a fretless include:

Some amazing bassists who play a fretless include:

Do the benefits of a fretless guitar outweigh the cons? That’s up to you to decide.

If you’re an accomplished guitarist looking for a new challenge, a fretless guitar may be a good next step for you.

But guitar newbies or intermediates may find a fretless guitar more frustrating than exciting.

That being said, if you get a chance to play one, you should definitely try it out! It’s an interesting experience.