This post may contain affiliate links. If you click on a link and make a purchase, we may earn a commission at no additional cost to you. Learn more.
by  Ben Tanner | Last Updated:  Nov 08, 2022 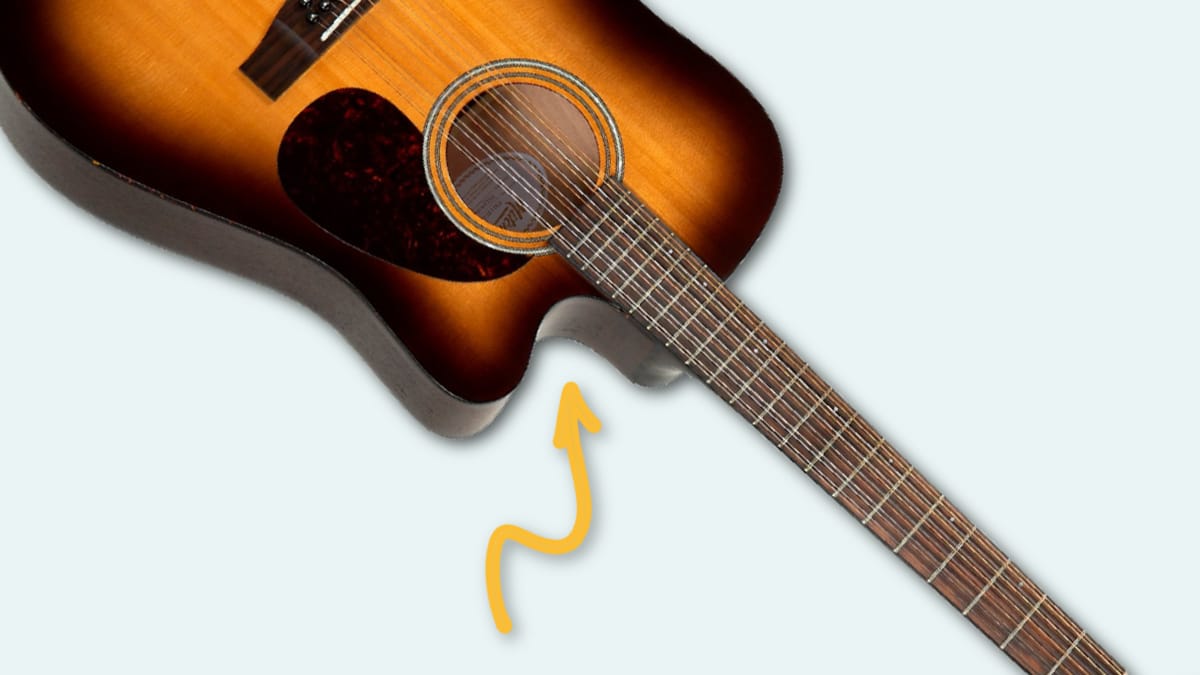 If you’re looking for a new guitar, you may have come across some “cutaway” options.

In this article I’ll share with you some of the advantages of cutaway guitars (and one disadvantage).

In this section I’ll go through some of the top benefits of cutaway guitars that I’ve found, through my own experience.

Overall, I think it’s worth it to get a cutaway, and the advantages outweigh the disadvantages.

As you probably know, a cutaway guitar is “missing” a corner – usually the lower left (for right-handed guitarists).

As a result, it’s easier to reach some of the higher frets on the fretboard, the ones that overlap with the guitar body.

On quite a few occasions, I’ve been playing around and trying to reach some of those higher notes on a regular acoustic guitar, and it’s actually pretty hard to play any of those notes.  That’s one reason it’s nice to have a cutaway guitar.

Oftentimes when I’m fiddling around and making up a little solo or lead guitar part, I work my way up the fretboard and then run into the guitar body.  Then I’m stuck.

But if I use a cutaway guitar instead, I can keep experimenting and move further up the fretboard.  So it’s a little more fun, and gives me more options.

For some reason, it’s just really satisfying to keep playing higher and higher notes when I’m making up a lead part. So those last few frets that I can only reach on a cutaway guitar are some of my favorites to use.

And if you can’t reach those notes, what’s the point of cleaning that part of the fretboard? 😉

3) It’s Easier to Practice Your Scales On a Cutaway

When you’re practicing scales, you can potentially go up and down the whole fretboard. Assuming you can reach all those positions. 🙂

Having a cutaway lets you use a few more frets compared with a traditional body shape, so you can practice your scale skills in even more positions.

4) It’s easier to play certain songs on a cutaway

There are quite a few popular songs that use solos or cords on the higher frets — the ones that are easier to reach with a cutaway guitar.

This is especially true for songs played on electric guitars.  In other words, a lot of rock songs (among others). One example would be “Stairway to Heaven”, though that’s played on a double-neck electric, so it’s also a slightly different story.

On the other hand, you can probably go without a cutaway for punk music, since it’s mostly just strumming bar chords.

If you’re imitating electric guitar songs on your acoustic guitar, it’s really helpful if you have a cutaway so you can reach the notes more easily.

5) A cutaway may save you from wrist pain

Lastly, a cutaway guitar may be good for your wrist.

Basically it can be awkward to try to reach some of those higher notes if you don’t have a cutaway.  But if you do, it just makes things a lot easier, and you don’t have to strain or bend awkwardly the way you otherwise might.

On many occasions, I’ve tried to reach some of the higher notes on a traditional non-cutaway guitar shape.  And it’s been a little awkward, and occasionally kind of painful for my wrist or fingers.

Are there any disadvantages to a cutaway guitar?

Not really. The only disadvantage worth mentioning is that your guitar sound won’t be quite as full, or quite as robust.

But in all honesty, the difference is pretty minimal, and I wouldn’t really even worry about this.

Overall, I think it’s pretty clear that the benefits outweigh the drawbacks when it comes to cutaway guitars.

In this section I’ll cover a few other questions about cutaway guitars, in case you’re still looking for more info. 🙂

What is a single cutaway guitar?

A single cutaway guitar is the typical variety, with just one of the lower corners missing.

Either way, it’s just one corner that is kind of “cut away” to make more space for your hand.

What is a double cutaway guitar?

As you probably guessed by now, a double cutaway guitar has two of the corners “carbed out”.

The nice thing about this is that it’s reversible, which means it can be used by right-handed or left-handed guitarists without any complications.

Double cutaways are more common on electric guitars, since removing two corners can have a bigger effect on the sound of an acoustic guitar (when it’s not being amplified).

What makes a cutaway guitar different?

As I mentioned previously, the main difference is the body shape, and the fact that it’s easier to reach some of the higher notes / frets.

Other than that, the difference is the sound may not be as full –  see below.

How does a cutaway affect guitar sound?

Basically, there’s slightly less room inside your guitar, so it will be at just a little bit less resonant with those corner(s) missing.  In other words, it won’t be quite as loud, or as full-sounding.

The difference is pretty minimal though, so I wouldn’t worry too much about this issue unless you’re super picky about how loud and resonant your acoustic guitar needs to be.

When in doubt, you can always head into a guitar store and try out a few cutaways and non-cutaways to get a feel for the difference.

And if you get an acoustic electric guitar, it’s not going to matter how resonant your acoustic guitar sounds during performances, since you’ll probably be plugged into an amplifier or PA system anyway.

Who made the first dreadnought cutaway guitar?

It’s hard to say for sure, but after doing a little research it seems like Gibson may have been the first company to start producing cutaway guitars (including the dreadnought).

For example, the Gibson L-5 was first produced back in 1922, including a cutaway option.

I hope you enjoyed this article about the benefits of a cutaway guitar.

Personally, I’ve never spent that much money on a guitar, and don’t currently own a cutaway acoustic guitar.  The one I play the most is a nylon string classical guitar, and those typically are not made with the cutaway body shape.

However, on quite a few occasions I’ve tried out cutaways in guitar stores, or that my friends had. And I definitely like them better overall,  especially when I’m just playing around.

While there are some slight disadvantages, like a less-resonant sound, overall I think the advantages of cutaway guitars easily outweigh the disadvantages.

Ben is a longtime guitar player and music enthusiast. He has performed extensively and recorded professionally. He founded Strummingly to help other people experience the joy of music.