Can You Play Guitar With Long Nails? [Tips & Tricks for Success]

This post may contain affiliate links. If you click on a link and make a purchase, we may earn a commission at no additional cost to you. Learn more.
by  Shanna | Last Updated:  Apr 27, 2022 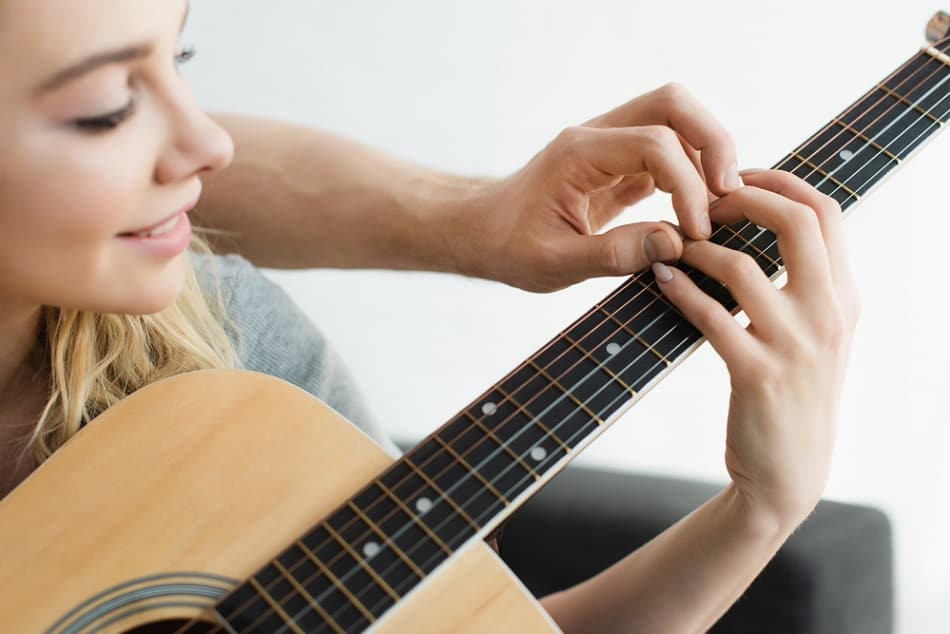 I’ve never been a girly girl. When I started learning guitar, my nails were as short as can be, and I’ve never grown them or worn false nails.

But I was reminded of how your nails can impact your guitar playing recently. A friend of mine started learning, and she was having trouble playing chords because her nails were so long!

This led me to wonder about something I’ve never thought about before: Can you play guitar with long nails?

The good news is that you can! It requires a bit of extra learning, but it’s possible.

How Short Do Your Nails Have To Be To Play Guitar?

Obviously, playing guitar with extremely long nails is going to be difficult and uncomfortable.

But trying to play with nails that are too short can also lead to pain and discomfort!

If you trim your nail too short and expose the nail bed, pressing your strings down on the fretboard can hurt.

At the minimum, you should be able to still see a thin white line once you’ve trimmed your nail.

How Long is Too Long?

Most guitarists will consider nails to be long if they extend over the fingertip, even if it’s by a small amount.

Anything longer than your actual finger will require you to hold your fingers at a different angle to press your strings down properly.

It’s perfectly possible to do that without discomfort if your nails are slightly longer than your fingertips.

Anything longer than that could get uncomfortable, especially for beginners. Intermediate or advanced guitarists would probably have an easier time adapting to longer nails, though it would still be annoying.

The longer your nails get, the harder it’ll be to hold chords, and the more likely the finish on your fretboard would get scratched.

The hardest part of playing guitar with long nails is pushing the strings down properly without causing hand or wrist pain or breaking a nail.

Most guitarists aren’t going to be happy to trim their fretting hand nails and not their strumming hand!

By the way, one creative solution would be to use a guitar slide on your fretting hand. Then your nails wouldn’t get in the way.

Other than using a slide though, there are basically two options for how you can hold chords (also known as fretting) with long nails:

Use An Open Tuning

If you want a great example of this, check out Dolly Parton. She admits to trimming her nails completely when she writes songs, but she likes to wear long acrylic nails on stage.

Her secret? She tunes her guitar in an open tuning.

Open tuning means tuning your guitar to different notes than the standard EADGBE. Using this tuning means that Dolly can play full chords without really having to push a lot of strings down.

Most of the chords she’ll play use one finger flat against the guitar neck. The nails don’t even get in the way!

This could be confusing for beginners who are still learning the basics, but it’s a viable option for people with very long nails on their fretting hand.

Beginners, this technique is what I’d recommend for you. If you have very long nails, you may have to trim them down slightly to do this.

Instead of using your fingertip, you’ll need to flatten your fingers slightly and use more of the front of your finger pad.

This can be a little tricky. You’ll need to push hard enough to depress the string properly, but not angle your fingers so much that they touch the other strings and deaden the sound.

It will take some practice, but the more you do it, the easier it will become. You may have to cut your nails down shorter than you’d like, but it’s a sacrifice worth making!

Strumming is the easy part of having long nails. In fact, if you learn how to strum using your nails or even how to fingerpick with them, you’ll never need a guitar pick!

If you’d rather use a pick, you can do that with long nails with just a bit of practice.

Long nails may hamper your ability to hold a pick comfortably. But it can be done! There are a couple of tricks to getting it right.

A standard teardrop-shaped pick may be too small to compete with your nails.

A larger, more triangular pick might work better, as it would be big enough to protrude over the nail when you hold it. If you don’t happen to have the right pick, you can also look into other guitar pick alternatives, or even make your own.

Second, you’ll need to tuck your other three fingers into your palm so that those nails don’t accidentally brush the strings as you strum.

Using Your Nails As a Pick

Technically, if you have long nails, you have a built-in pick! You can use the nail on your thumb or first finger to strum across the strings.

If you’re a fan of fingerpicking, you basically have five picks in one. With a bit of practice, you can become a fantastic finger picker!

It’s a good idea to protect your nails with a layer of nail polish to keep them as strong as possible and prevent breaking.

If you get good at this, you can even look at shaping your nails in certain ways to enhance your playing!

Should I Cut My Nails to Play Guitar?

I’ll be honest – when I began teaching my friend guitar, I suggested she cut her nails down to normal length.

I would recommend the same to you, if you’re serious about playing the guitar.

If you’re intent on becoming a fingerpicking pro, then keeping the nails on your strumming hand long could benefit you.

For long-nailed guitarists who are confident enough to learn a new tuning style and how to play chords in a new way, that could be worth trying!

But for anyone else, I’d highly recommend trimming your nails so you can hold chords properly and comfortably.

Summary of Tips and Tricks

To summarize, here are the things you need to know if you want to play guitar with long nails:

Can you play guitar with long nails? The good news is that if you really want to keep your nails long, you can still play guitar.

If you’re new to playing guitar, you may need to experiment with how you hold your fingers on the fretboard so you can play chords cleanly.

If you’re an experienced guitarist with some musical knowledge behind you, using an open tuning can make playing guitar with long nails much easier.

If you’re struggling with fretting chords and don’t have the musical knowledge to be comfortable playing in an open tuning, then you may be faced with the decision to cut or file your nails.

But spend some time playing around with it and see what works for you!