How to Apply Music Theory to Guitar (Keys for Beginners)

This post may contain affiliate links. If you click on a link and make a purchase, we may earn a commission at no additional cost to you. Learn more.
by  Shanna | Last Updated:  Jun 06, 2022 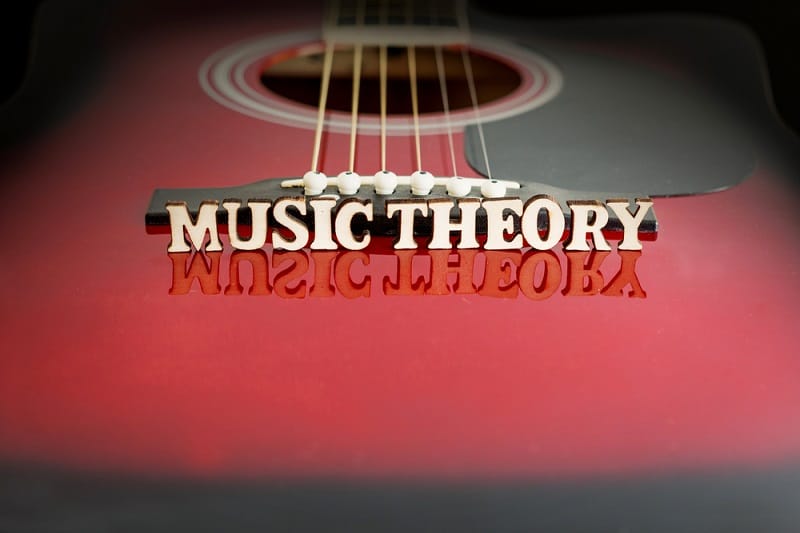 Does the thought of musical theory bore you? Or, even worse, does it freak you out?

I’ll admit, the idea of music theory can be intimidating.

But the good news is that learning how to apply music theory to guitar really isn’t that hard.

It took me a long time to realize that every time I played a scale or put a few chords together for a song, I was using music theory.

Today I’ll share a few important parts of music theory that aren’t terribly hard to learn, and how you can apply them to guitar.

What is Music Theory Exactly?

Music theory is all about the elements that make up music, and how to fit them together to create pleasing music.

Traditional music theory is often geared towards piano and orchestral instruments. It gives a great understanding of the layers of music, but it’s not always easy to apply to guitar.

There are a few specific elements that are important to guitar, however, which I’ll explain further down.

Why Learn Music Theory (as a Guitar Player)?

Do you need to learn music theory if you aren’t planning on becoming a professional musician?

Even if you are planning on being a pro, you may feel that music theory is a waste of time.

But music is a language. If you tried to learn a language without learning grammar, you may be able to speak it okay but you’d never be fluent!

Learning musical theory can help improve your guitar playing if you want to:

Sure, you don’t have to learn music theory.

But understanding the basics as they relate to guitar can supercharge your playing.

Music theory is the key. Whether you’re playing country music, the blues, hardcore metal, or classical, it’s an intrinsic part of music!

What Elements of Music Theory Are Helpful for Guitar?

You don’t need to go deep into music theory to start using it with your guitar.

Here are 3 elements of music theory you may want to consider learning as a guitarist.

You can’t just play any old chords and make something sound good. Certain chords go together harmoniously and others don’t.

Learning which chords fit into which keys is helpful. It’s especially helpful if you want to improvise, or write a song.

One common combo that works in any key is the 1-4-5 formula.  Here’s how it works:

Starting with the main chord of your key, simply count 4 chords ahead in the list of notes/chords (A, B, C, D, E, F, G).

It’s really common for songs in the key of G to use the G, C, and D chords.

1-4-5 is a super simple chord progression, and used in a lot of easy beginner songs.  It’s also pretty common to add the 6th chord (a.k.a. the relative minor, which in this case is E-minor), or the 3rd chord (in this case, B-minor).

This can get a little confusing when you incorporate sharps and flats, so it may help to just memorize a few common chord progressions by heart.

Once you have a decent idea which chords fit together in each key, understanding which notes make up each chord can also be helpful.

Chords are groups of notes that fit together harmoniously. For example, “major” chords consist of the first, third, and fifth note of the major scale.

Knowing this means you can play the C chord anywhere on the fretboard. As long as you’re holding a C, E, and G note (with nothing else in between, unless it’s another of the same notes), it’s a C chord.

This can seem a little complicated, so an easier way to understand it is to start learning barre chords. For example, you can play a regular, “open” A chord on the second fret, or you can play a barre A on the 5th fret.

Not all of the same chords sound exactly the same, either. For example, when you play the barre chord some of the notes in the chord will be higher, so the chord overall will sound higher. (Sidenote: It’s also a lot easier to mute with your hand when you play a bar chord.)

If any of that seemed confusing, here’s an excellent tutorial on barre chords and how they relate to basic chords:

Understanding barre chords is a useful part of music theory (applied to guitars), and it allows you to use your full fretboard for playing chords!

Other Types of Chords

Once you’ve learned your major chords, there are others you can learn.

For example, a minor chord is a flattened third note. So a C-minor chord would consist of the notes C, E, and F-sharp (instead of G).

Other chords you can branch into include diminished, major 7th, minor 7th, dominant 7th, minor 7b5.

Intervals are the distance between two notes. The two simplest ones are whole steps and half steps. These are also known as tones and semitones.

Typically, a whole tone moves across two frets, while a semitone is a one-fret move.

Understanding this is crucial to learning scales.

(Understanding intervals is also really helpful when learning how to tune a guitar by ear, or if you’re learning bass guitar.)

How to Apply Music Theory to Guitar

The purpose of learning music theory is to be able to apply it in practice. You can know all the information, but if you don’t know how to use it practically, then it doesn’t do you much good.

If you’ve got a guitar and the music theory knowledge above, it’s fairly easy to apply in practice.

Here are a couple of ways you can start:

Figure Out the Keys of Your Favorite Songs

Using the 1-3-4-5 chart above, you can figure out the key and the chords of your favorite songs. Put your radio or mp3 player on, and try to figure out the first chord in the song.

Once you’ve found one chord, you can work your way to the others by using the relationships on that chart.  (A lot of them will also use the 6th chord, as I mentioned above.) It’s a simple way to learn to play a song, and an excellent way to put your musical theory into practice!

It’s not always straightforward though. If you listen to jazz, for example, they often add weird and wonderful chords into their songs! But more songs than you realize are simple and stick with the basic chords.

Work on Your Scales

Scales are an essential part of soloing. Once you learn intervals, you’ll find it easier to learn your scales.

There are a ton of different scales.

Here’s a great tutorial on the pentatonic scale so you can start learning and practicing!

Another great way to put music theory into practice is to improvise! And the best way to improvise is to use backtracks.

Pick a backing track in a particular key and play along!

You can practice your chords and scales when playing along with a backtrack.

For example, if the track you choose is in the key of A, you can work on soloing in the A major scale.

At the same time, you could simply work on switching to alternate chords instead of your regular chords.

Here are my favorite backtrack apps:

Backtrackit is free with in-app purchases, while the other two require a small fee to be able to download them.

Once you feel confident with the app, you can jam with friends and improvise in real life as well!

What You Don’t Need to Learn Immediately

There’s no need to learn how to read music straight away. But I do recommend learning to read guitar tabs, which isn’t hard.

Most music theory on the guitar can be learned using a combination of guitar tabs and diagrams.

What You Need to Bring to the Table

Even though it’s nowhere near as complicated as it might seem, music theory isn’t a walk in the park.

You’ll need to be prepared to put in a little time and effort to understand it.

Apart from a guitar and the desire to learn, you’ll need:

Learning how to apply music theory to guitar isn’t that hard. All you need is to focus on the right elements and remember why you’re learning them.

Give it a try!

You should find that music suddenly becomes easier, and more fun. Everything fits together more logically, and you can play along with friends or backtracks.

Don’t be intimidated by music theory. Start with chord combos and a scale or two, and you’ll level up pretty quickly.

Have fun, and thanks for reading!