This post may contain affiliate links. If you click on a link and make a purchase, we may earn a commission at no additional cost to you. Learn more.
by  Shanna | Last Updated:  Jun 07, 2022 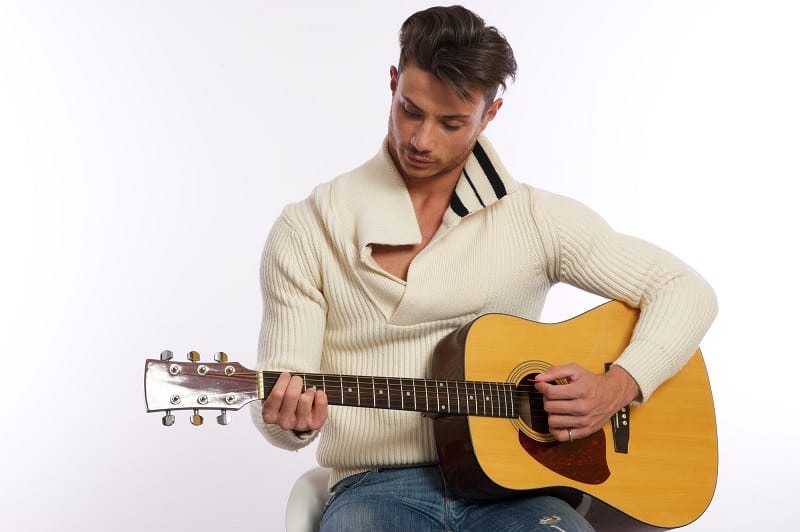 I’d been playing guitar for a few years when I joined a band.

I didn’t realize that he was a leftie, at first. He had a beautiful right-handed 7-string guitar, so it was only when he picked it up to play that I noticed something looked strange!

Until then, I’d never considered how to play guitar left-handed.

I suddenly realized that most guitars were made for right-handers, and it must be tough to be a leftie!

Since then I’ve come across a few other left-handers, all of whom had their own way of playing.

I’ve learned a lot from each one of them. If you’re a leftie, I’ve got some tips and tricks for you to help you play comfortably and easily!

What’s the Difference Between a Right-Handed and Left-Handed Guitar?

Technically, there’s no difference between the two. Each one has the exact same components, and is put together the same way.

The problem for lefties comes in when the design of the guitar is explicitly right-handed.

There are three things that really make a difference in the design of the guitar: the cutaway, switches and dials, and the headstock.

Some guitars are crafted in such a shape that they allow a right-handed guitarist a bit more space when soloing.

When you flip a right-handed Fender Strat or Gibson/Epiphone Les Paul, for example, your cutaway is on the wrong side and becomes useless for a left-hander.

But a right-handed guitar like a PRS SE Standard with equal cutaways on either side, would work both ways.

The placement of the pickup switch, volume, and tone dials also makes a difference.

On a right or left-handed guitar, the controls are normally positioned on the bottom half of the guitar, out of the way but still within easy reach.

If a left-hander flips a right-handed guitar upside down, then the dials will be above the strings when they’re holding the guitar. This could be uncomfortable for a left-hander to reach while they’re playing, or just look kinda funny.

This is purely an aesthetic thing, though.

Just because the headstock is angled one way, it doesn’t mean you can’t turn the guitar or restring it the other way. You absolutely can!

You may not like the way the headstock looks when it’s flipped, though. If you can’t picture it, have a look at some pics of Jimi Hendrix and his famous upside-down Fender Strat

But did you know that Jimi Hendrix’s dad tried to force him to play right-handed because he believed playing left-handed was of the devil?

Or that Paul McCartney is actually a right-hander who found it more comfortable to play left-handed?

Even more interesting is the group of natural lefties who learned how to play guitar right-handed, because it was easier or more accessible, like:

Some guitarists, like Albert King, even learned to play a right-handed guitar upside-down without restringing it.

The variety of professional lefties out there is a sign that no matter how you feel comfortable playing, you have just as good a chance of being successful!

Advantages and Disadvantages of Being Left-Handed

Being a left-handed guitarist isn’t a problem. As you can tell, some of the best guitarists in the world are!

But it can be difficult to navigate because:

Here’s an extended rant about the disadvantages of being a left-handed guitarist:

There are advantages though:

As you’ll have seen in the list above, some people who are naturally left-handed choose to learn to play the guitar right-handed.

This could be the way to go, if you’re struggling to play left-handed.

But if you’re learning to play right-handed and it feels unnatural, learning how to play guitar left-handed could be the right call.

What’s the Best Way for a Left-Hander to Play Guitar?

There’s no single answer here. It can depend on guitar availability and how comfy you feel playing.

But there are three ways for left-handers to get comfortable with a guitar.

The one you choose is up to you! Let’s look at some advantages and disadvantages of each.

I’d recommend buying a left-handed guitar if you’re just starting out. Most of the big names (and many of the smaller names) make guitars specifically for lefties.

Choosing a left-handed guitar will make your playing experience easier from the start!

The strings will be in the right place, and you’ll find learning chords and notes easier.

Use a Right-Handed Guitar

Can a left-handed person play a right-handed guitar? The short answer is yes!

Playing guitar left-handed on a RH guitar can be done one of two ways.

Restring It to Suit a Leftie

Number one, you can restring a right-handed guitar so the strings are the right way up for a leftie!

This is the most common way of doing it, and it’s pretty simple and easy.

If you can’t find a left-handed guitar that you like (or at all), then this may be your best bet.

This video walks through the steps for restringing a right-handed guitar to be left-handed.

Leave the Strings As Is

Number two, you can learn how to play a right-handed guitar left-handed just by flipping it upside down.

This can be difficult and confusing though. You’ll need to flip all your chords upside down when learning them, because your strings will be upside down.

Choosing to play this way has one big advantage: almost every guitar you’ll come across will be right-handed.

If you can play a right-handed guitar (with the strings upside down), you’ll be able to pick up any guitar you find and play it.

It can be hard for a beginner guitarist to learn. I recommend only trying this if you’re quite familiar with your strings and chords and can deal with practicing them in a new way.

(It may also help to learn how to apply music theory to your guitar playing, in case you run into an unusual scenario.)

How Do You Hold a Guitar If You Are Left-Handed?

Everyone knows how to hold a guitar. Most of us were playing air guitar on broomsticks before we had our own real ones!

The only difference between a rightie and a leftie holding a guitar is where their strumming and fretting hands are.

A left-hander (the other 12%) will have their right hand on the neck holding chords, and their left hand on the body, strumming or picking.

Learning How to Play Guitar Left-Handed

Once you’ve figured out how to hold a left-handed guitar, the next step is to start learning chords.

The notes of chords don’t change. But your hand placement will be the mirror image of a right-hander.

Watching YouTube videos can be a great way to learn the chords, strumming patterns, and things like tuning your guitar. You can also find chord diagrams online.

Thankfully, the internet is so chock-full these days that you can not only find left-handed chord diagrams, but also entire sites dedicated to left-handed playing, like Lefty Fretz.

If you find a channel you really like that is predominantly right-handed, you’ll need to flip the chord diagrams to match your guitar neck.

Make sure the nut on the diagram is where the nut would be on the guitar and you should pick it up quickly!

Going to a right-handed tutor could be an advantage. All you need to do is mirror exactly what they’re doing!

If you’re looking for more advanced lessons, like learning scales for soloing, a left-handed teacher could be best to explain the ins and outs of notes, modes, and scales from a leftie’s perspective.

Learning how to play guitar left-handed may seem intimidating, but I promise it’s not as difficult as it seems!

All you need to do is decide which method works best for you and stick to it.

If you started playing on a right-handed guitar and it doesn’t feel natural or comfortable, try getting yourself a leftie.

Parents, if you have a left-handed child and you’re contemplating getting them their first electric guitar, I’d recommend trying to find a true left-handed guitar.

If you’re looking at an acoustic guitar, it’s much easier to find one that would suit both left-handers and right-handers.

Either way, playing guitar left-handed is not as hard as it may seem at first.

Just pick your style, stick with it, and you’ll see results!