Can You Play Electric Guitar Without a Pick? 6 Strumming Tips

This post may contain affiliate links. If you click on a link and make a purchase, we may earn a commission at no additional cost to you. Learn more.
by  Colleen Glennon | Last Updated:  Oct 27, 2022 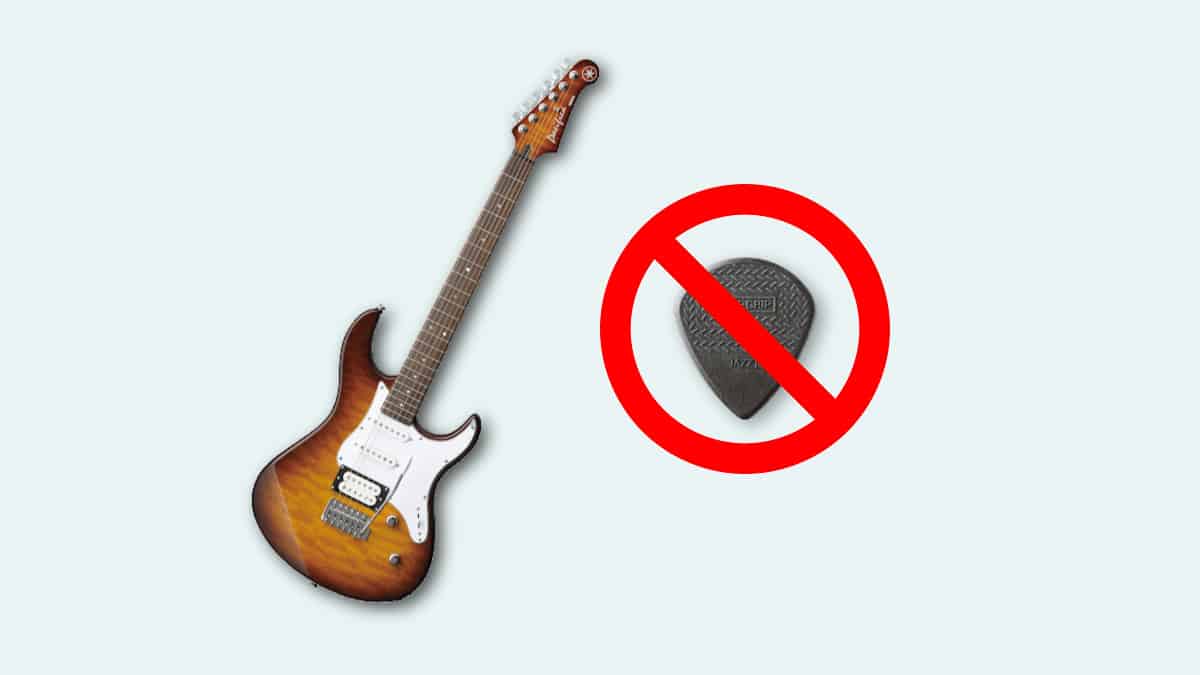 Can you play electric guitar without a pick?

Yes. You can absolutely play the electric guitar without a pick. Strumming an electric guitar with your fingers creates a natural, warmer sound. But finger strumming doesn’t sound as clear or loud as with a pick. As a result, you may get drowned out by other instruments. Thus, use a pick if you’re playing in a band or in front of a live audience.

When mastering the guitar, most players want to play all the time — even if there’s no pick around.

If you’ve strummed with just your fingers, you may have wondered: can you play electric guitar without a pick? Will doing so hurt your fingers — or worse — damage the guitar?

Honestly? It’s completely safe to strum with your fingers. In fact, many experienced players choose to play with just their fingers all the time.

Below I detail the pros and cons of using a pick, how to choose the right pick, and more to help you decide if you want to use a pick or go pick-free.

Is it Better to Play an Electric Guitar With a Pick?

Like with all art forms, there’s no one exact way to play the guitar. As a result, there’s no definitive answer to whether it’s better to play an electric guitar with or without a pick.

Instead, there are benefits, drawbacks, and personal preferences for either option.

When deciding whether to practice with a pick, think of your own personal comfort. If it feels more natural to use your fingers, I say toss those picks in the trash and let your guitar rip.

Benefits of Playing an Electric Guitar Without a Pick?

Not only can you play the electric guitar without a pick but doing so comes with benefits that strumming with a pick does not.

When you use your fingers to pluck the steel strings, your skin creates a softer vibration than a hard, plastic pick would. The sound, then, transforms into a much more natural, warmer, softer tone.

There are other benefits, too, like how you can strum two strings at once. This technique (called arpeggio) is impossible to execute when you use a pick.

The Best Guitar Picks for Speed

Even if you play with a pick, once you become a more sophisticated and skilled musician, you may want to experiment with the arpeggio technique.

And I can’t forget the best benefit of strumming with your fingers: you’ll have one less thing to worry about!

When players are just learning, they struggle to balance strumming, holding a pick, learning chords, and hitting the right notes. To make matters worse, holding a pick can feel awkward. Some players (even advanced players) can lose or drop the pick during a jam session.

Strumming with your fingers crafts a specific, warm sound and can also be an asset when attempting a more elaborate strumming style.

Cons of Playing an Electric Guitar Without a Pick?

Generally, picking with your fingers makes it harder for you to hit notes accurately. This is because your fingertips are much larger than the tip of a pick.

If you’re a beginner just learning how to pick with your fingers, remember that it’s a bit of a learning curve to nail note accuracy. Playing with a pick allows players to hit notes and chords faster, sharper, and louder than those playing with their hands. 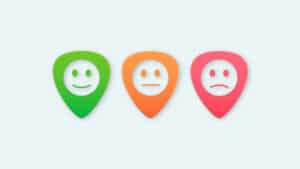 And, once you get the hang of holding the pick while you play, you will feel much more control playing with a pick than without one.

Of course, much of this goes to personal preference, but many guitar players enjoy using a pick for that very reason.

6 Ways to Strum a Guitar Without a Pick

There are many techniques to play the guitar with just your fingers, like ghost picking, thumb strumming, carter scratch, and many more.

Ah, ghost picking; perhaps the coolest name for a finger strumming method in the history of the guitar.

Ghost picking is the term used to describe when you press your fingers together as if there were a pick between them. The result is a uniform, soft sound from your nails striking steel strings.

Most people use the ghost picking technique when they can’t find a pick lying around. This is because the nail doesn’t give quite a soft enough sound as other finger strumming methods.

So, if you’re finger strumming to get those soft, warm tones, choose a different approach, like thumb strumming.

Can You Play Guitar with Long Nails? (Tips & Tricks for Success)

Thumb strumming is…you guessed it! Striking the strings with the fleshy part of your thumb.

The trick to executing the thumb strumming technique is to use your elbow to give you the momentum to propel your thumb up and down the strings. Do this instead of making your thumb or wrist do most of the moving.

When you start out with this technique, take extra care to ensure you’re doing a light strum over all of the strings versus playing each string too deep. It’s that lighter brush that creates a chord rather than playing each individual note. 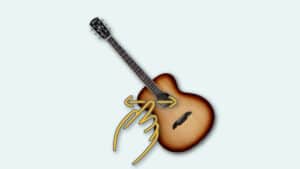 How to Strum a Guitar (A Beginner’s Guide)

Also, make sure you’re using the fleshy part of the thumb. Don’t get discouraged if it sounds a little weak or quiet; strong thumb strumming takes practice.

And, even when you do master this strumming technique, it will always sound a little quieter compared to using a pick.

Of course, if you want an even crisper sound, you can experiment with using the edge of your nail to hit the strings.

Finger strumming is exactly what you would expect! It’s when you use your other fingers in addition to your thumb to strum the strings.

With finger strumming, you can combine all of your fingers to play one chord. You can also use different fingers to pluck various strings for a more elaborate jam session.

Unfamiliar with guitarist Maybelle Carter? Allow me to introduce one of the greatest guitar players ever to grace the stage.

Carter revolutionized the guitar by being the first to use it as the lead instrument. In turn, she paved the way for how we play the guitar today.

Maybelle Carter developed the Carter Scratch. This is when she used her fingers to play the melody and rhythm at the same time.

In short, Maybelle transformed the guitar from the background to the center stage.

The claw hammer is a finger strumming technique where you form your hand into a claw (while still keeping the hand loose!).

Once you form your hand in the correct position, rake your hand down the strings and keep your thumb on the bass strings.

When you strum down, use your index and middle fingernails to strum the upper strings, then pluck the lower strings.

While you can experiment with what string you keep your thumb on, traditional clawhammer songs use the thumbs to pluck the lower strings.

Rasgueado technique is a type of finger strumming often used in classical and other fingerstyle music genres.

What’s different about the Rasgueado technique is that you only use one finger for each string. This allows players to strum quicker as you can do multiple strums in one fast succession.

The Rasgueado technique is difficult to master. However it’s a very fun technique once you get it down!

Famous Guitarists That Don’t Use Picks

If you love the one-hit-wonder band The Doors (just kidding), then you’ll be interested to learn that Robby Krieger played with fingers.

Many critics credit Kriegers strumming to that band’s success. His warm guitar tone made a perfect contrast to Jim Morrison’s raw, untamed voice that created such magic.

Is jazz more your style? Look no further than American Jazz guitarist and legend Wes Montgomery. He carved a name for himself in the music world by picking with the side of his thumb. His thumb-picking created a warm, distinctive sound that rocketed him into legendary status.

Looking for even more guitarists? Jeff Beck, Albert King, and Mark Knopfler are all part of the elite group of legendary guitarists who tossed their picks in the trash.

So, the next time someone dares say you need a pick to play music, point them to these greats.

What are the Best Guitar Picks for Beginners?

When you’re new to the guitar, you may not realize there’s a whole art dedicated to using the best picks. Shape, material, and thickness all produce different sounds and quality.

Some have better grips that are easier to wield and control, some have a larger body, and some have bold materials like wood or stone.

With so many picks ranging in sizes and shapes, it’s hard to know which shape is the best for you.

Most beginner players choose a bigger pick profile and body as it’s easier to hold onto. The biggest hurdle you’ll face when you start practicing is learning to keep hold of your pick. For that reason, I recommend trying different shapes that feel right in your hand.

There are a lot of options, ranging from stone, metal, to plastic, nylon, Delrin plastic, and more. I recommend using a pick that has a grippy sort of material.

My biggest piece of advice? Stay away from those super flexible materials. If there’s too much flexibility, your pick will linger on each string too long. Then, you won’t have the crisp, robust sound you want when you use a pick.

Materials like celluloid are often the most rigid and can give you that crisp sound.

Generally, beginner players should use lighter picks (or picks that are .06mm). Thinner picks are great tools to use when playing chords or mastering the art of strumming.

Playing the guitar is all about creativity and expression. Use whatever tools you have—a pick or your fingers—to create the sounds and music that feel the best for you.

Don’t hold yourself back by constraints or made-up rules; some guitarists even use the palm of their hands to hit the strings. The important thing is to have fun and make some rockin’ music.

What can I use if I don’t have a guitar pick?

Craving a jam session but can’t seem to find your pick anywhere? No worries! There are numerous substitutes for picks, including your fingers, thumb, or even coins.

Choose a coin like a quarter or a nickel, as these coins are more mid-size and should fit in your hand relatively well.

Is fingerpicking hard to learn?

Fingerpicking isn’t too hard to learn. It does present beginner players with a learning curve, but it’s not impossible to overcome.

If you’re dedicated to the idea of mastering the art of fingerpicking, the answer lies in practice.

Make sure to switch up your technique and practice fingerpicking both melodies and chords to truly master this technique.

Is fingerpicking good for beginners?

Fingerpicking is a great technique for beginners. Using your fingers to strum allows you to focus on other aspects of playing, like rhythm, fret finger placement, posture, and more.

Most players struggle with holding onto their picks. So, strumming without one is an excellent way to immerse yourself in the groove of playing.

Colleen Glennon is a content writer obsessed with writing about travel, music, food, and entertainment. As a content writer by day and a TV-fanatic by night, Colleen is always up for a fierce discussion on what the best show on television is (spoiler alert: it’s Wentworth). When she’s not at home writing, you’ll find her walking her tortoise around sunny Los Angeles