Who Plays What? 5 of Your Favorite Blues & Rock Artists’ Guitar Rigs

This post may contain affiliate links. If you click on a link and make a purchase, we may earn a commission at no additional cost to you. Learn more.
by  Shanna | Last Updated:  Oct 31, 2022 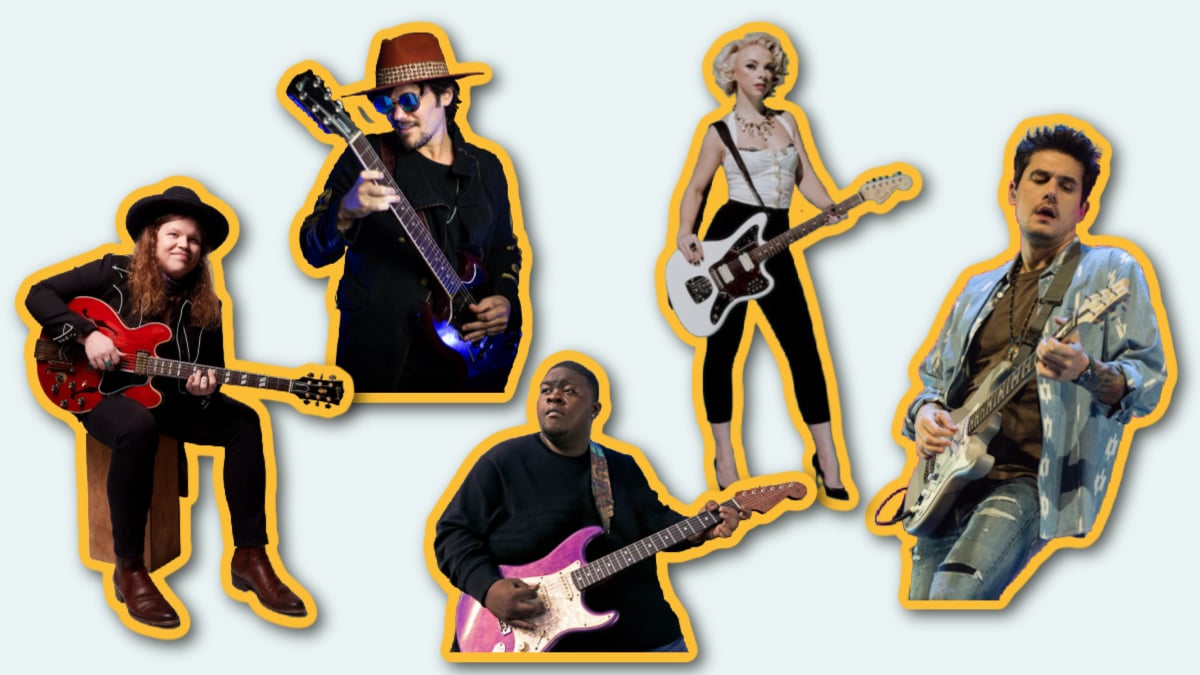 Whether you’re a beginner or a pro guitarist, chances are you have your favorites. Favorite guitar, favorite amp, even down to the guitar pick you like the most.

For guitar newbies, aesthetics may play a bigger part than tone. But the pros tend to gravitate towards gear that gives them the sound they’re after—their own classic tone and vibe.

So who plays what? Here’s a quick rundown of some of today’s best blues and rock artists’ guitar rigs.

Although he began as a soft, acoustic pop artist, today John Mayer’s name is synonymous with modern blues rock. After years as a Fender artist, Mayer made the switch to PRS in 2015.

His signature Silver Sky model is based on a 60s Strat shape with a classic 3 single-coil pickup configuration, giving him that creamy blues tone. For his acoustic stuff, Mayer also has a Martin signature model, the John Mayer D-45.

As for amps, Mayer collaborated with PRS to create the J-MOD 100, which he uses for both live shows and recording. It’s a single-channel tube amp with a wide dynamic range and a lively tone, despite having no built-in reverb.

Mayer’s rig is rounded out with the Reverberato reverb unit from Victoria Amps, a Bricasti M7, and a well-stacked pedalboard, including (but definitely not limited to) an Ibanez TS10, a Klon Centaur, and a Boss TU-3 pedal for the acoustic.

This fourth-generation bluesman has been making waves since he was just out of his teens. At the age of just 25, King received a signature Gibson—the Marcus King 1962 ES-345—modeled on the ES-345 handed down by his grandfather. He switches between that, a 1965 Fender Telecaster, and a 1970s Ibanez SG copy. His preferred acoustic guitar is a 1961 Martin O-18.

Amp-wise, he plays with his signature Orange amp, the Marcus King MK Ultra, and a 1965 Fender Super Reverb. Before moving over to Orange, King used Homestead amplifiers, which he still does on occasion.

His pedalboard includes a Fulltone Deja Vibe, an Ernie Ball volume pedal, and a Dunlop Wah. If King’s on his Gibson, he uses an Ibanez TS9 Tube Screamer throughout the set, although subtly. On the Tele, he often uses a Fender Mirror Image Delay. He’s also endorsed by Elixir Strings.

Bluhauz (pronounced Blue House) isn’t a newbie to the music world. He headed up the band Stone Giant before branching out into a solo career, with his debut album due to drop any day now.

The left-handed blues rocker favors a classic red Gibson SG, which goes a long way towards bringing the hard rock vibe to his bluesy riffs. Like many blues artists before him, Bluhauz uses Orange amps. They have a reputation for being pretty beefy and add to their robust sound.

The final piece of the Bluhauz gear puzzle is a Fulltone Octafuzz stompbox. Its muscly, crunchy tone is evident on the singles he’s released so far.

Kingfish comes off a hell of a 2020, having won 5 Blues Music awards, including Album of the Year and Best Emerging Artist Album.

Ingram’s number one guitar (since 2016) is a Les Paul-style guitar built by Mike Chertoff. He also has a Tele-style custom by Chertoff, and is also often seen with a red Fender Stratocaster. He plays a Gibson J acoustic.

Ingram is a fan of Peavey amps, but also uses Fenders. He changes up his pedalboard fairly often, but some of the stompboxes he’s been known to use include a Dunlop Cry Baby Mini Wah, a Klon Way Huge Conspiracy Theory OD pedal, an EWS Brute Drive, and an Ibanez Tube Screamer.

This South African blues rock guitarist has been active in the musical world for more than two decades and was recently named as one of the top 10 Best Rock Guitarists in the World by Total Guitar Magazine.

His guitar of choice is a 1962 Strat, played with Fender heavy picks for a robust sound. Patlansky has played Dr. Z EZG-50 amps in the past, but his latest rig includes a Honey Bee tube amp instead.

Samantha Fish has been called a rising star in recent years, but she’s been making blues music for almost 15 years. She’s also been winning awards since 2012, and has released a staggering 10 albums in 10 years.

Fish has a few favorite guitars, the first being a white Gibson SG. She also regularly uses a Fender Jaguar Classic, a Vintera Series Jaguar, a koa-wood Taylor K24ce acoustic, and a Delaney 512 for slide guitar.

She also loves unique guitars, and regularly brings out the Stogie Blues cigar box guitar. Her Danelectro baritone guitar made its debut appearance on her 2019 album, Kill or Be Kind.

Fish usually uses a Camille amp head and cabinet, although she switches it up with an Andrew head on occasion.

Her can’t-do-without stompbox is a beat-up Analogman King of Tone distortion pedal. For more crunch, she uses a JHS Mini Foot Fuzz. Others seen on her board include a Boss Super Shifter, an MXR Carbon Copy Analog Delay, and a JHS Tidewater Tremolo pedal.

I hope you found some useful tidbits in my rundown about some of the best professional blues and rock guitar rigs.

As I mentioned in the intro, beginners tend to care a little more about aesthetics, like what type of finish their guitar has. But the pros care about the sound and playability, to get just the right tone and feel.

As you can see, there’s quite a variety of equipment and brands overall. On the other hand, there’s a lot of overlap, and some brands and products that tend to be popular among multiple professional artists.

If you want to set up your own guitar rig, feel free to check out some of my other review articles that cover various guitar equipment you could use.  Hopefully we can help you get started. 🙂