Why Is Stairway to Heaven Banned in Guitar Stores?

This post may contain affiliate links. If you click on a link and make a purchase, we may earn a commission at no additional cost to you. Learn more.
by  Shanna | Last Updated:  Nov 09, 2022 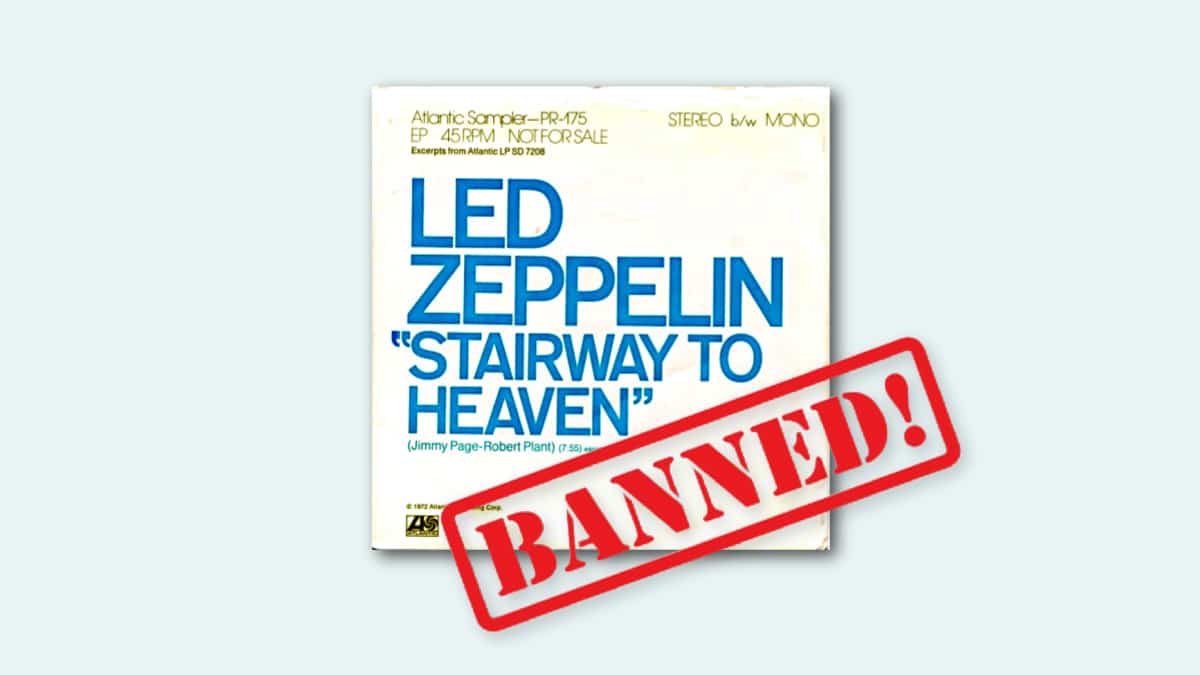 What do “Stairway to Heaven”, Crocs, and the word “like” have in common? They’re all used way too much… And mostly in completely the wrong time and place.

Did you know that playing Stairway is banned in most music stores? Yep!

To be honest, I don’t have my own Stairway story of being shushed by an irate guitar store assistant.

When I first started playing, it took far too long for me to get good enough to even attempt something like that!

But I have heard about fledgling guitarists being asked to stop by annoyed staff members (who have obviously heard the instantly recognizable guitar riff a few too many times).

Obviously most guitar store staff aren’t going to kick you out just for picking those specific few notes. But it’s understandable why they’d be a bit tired of hearing it.

But on to the important question – why is Stairway to Heaven banned in guitar stores?

Before we get into the details, take 10 minutes of your day to watch this piece of musical genius–and marvel at that beautiful double-neck, too.

Why Is “Stairway to Heaven” Banned in Guitar Stores?

In order to really understand why it’s not a popular choice to play in a music store, you’ll need to know some of the history behind this classic song.

You might be surprised to learn that this classic piece of music has a bit of a checkered past!

The Controversy Behind Stairway

Written by Jimmy Page and Robert Plant, it was released in 1971 and is often regarded as the most popular rock song ever, even today.

Led Zeppelin’s own bassist recalls that the first time they played the song to a live crowd, the audience was “bored to tears”. So it got off to a bit of a rocky start!

But the reasons why guitar stores don’t like patrons playing it come from a few different things.

In 2014, the band ended up in a legal battle over copyright issues.

According to another band, called Spirit, Jimmy Page had copied Stairway’s classic opening melody from one of their songs, which had been released 2 years earlier.

It took 6 years for a court to rule that Led Zeppelin was not guilty of copyright infringement.

Obviously playing a guitar riff in a store while testing a new instrument doesn’t infringe on anything. But it’s just one of the elements that makes the song so controversial.

Wayne’s World fans, you’ll know exactly what I’m talking about! Here’s a quick reminder, and for those of you who don’t know what this is about, watch this laughable gag before reading on:

One: the fact that inevitably, a new and not very good guitarist with an attitude will bust out a song he/she can’t actually play yet.

Two: it’s a nod to all the poor guitar store employees who have to sit through multiple (some good, some okay, and some terrible) renditions of the song on a daily basis.

“No Stairway! Denied!” has become a cult thing in guitar stores all over the nation, saving staff members’ ears, thanks to Wayne.

If you’re thinking that what he plays in the movie sounds nothing like Stairway, keep in mind that Led Zeppelin were notoriously picky about giving permission to use their songs in shows or movies. Wayne’s World had some troubles with that as well.

Back when Led Zeppelin was big (and even still today), some well-meaning moms and dads thought that rock music was from the devil.

Sure, there was a sex, drugs, and rock n’ roll kind of culture. But the music was (and is) just like any other – about life (just with more metaphors than modern music).

In 1982, a religious broadcasting network announced that evil messages had been hidden in popular rock songs, using backmasking – a recording technique that allows a secret message to be heard when the song is played backwards.

“Stairway to Heaven” apparently contains a secret love song to Satan within it. When a certain section is played backwards, the words:

“Here’s to my sweet Satan, the one whose little path would make me sad whose power is Satan. He’ll give, he’ll give you 666. There was a little tool shed where he made us suffer, sad Satan,” can be heard… Or so they say.

Yep! Apparently, these talented guys spent inordinate amounts of time sneaking a hidden ode to Satan into their song, while making it sound perfectly amazing while played forwards, too.

Most musicians (and Led Zeppelin themselves) don’t take this seriously at all. It’s just one more piece of the controversy surrounding the song.

But just in case, maybe stick to playing it in your own music room.

The “Everyone Learns This When They’re Starting” Thing

There are some songs that almost every guitarist learns to play (at least the intro to) when they’re still a beginner. Stairway to Heaven is one of them.

This is probably the biggest reason (on top of the Wayne’s World joke) that not playing Stairway in a guitar store is the right thing to do.

(I wonder how differently they would feel if they heard a great rendition of it played on a fretless guitar).

Other songs I’m pretty sure guitar store staff get annoyed at include:

More advanced guitarists may throw out some “Nothing Else Matters”, “Layla”, or “Sweet Child O’ Mine”, all of which are almost instantly recognizable.

(Of course, for some of these songs you’ll need a cutaway guitar to play it properly, so it depends on what guitar you’re trying out at the store.)

To be fair, “Stairway to Heaven” is not legally banned in guitar stores. It’s considered more of an etiquette thing – think of all those poor employees who have to sit through every guitarist’s rendition of the song.

Of course, there’s always the off-chance that you may be accidentally worshipping Satan, but thankfully, those chances are low.

So, why is “Stairway to Heaven” banned in guitar stores? Basically, for nothing more than an old joke and some store staff who really don’t want to hear it again.

I do suggest you try it for a bit of fun next time you’re in a guitar store though, and let us know what reaction you get!

But if you’re really interested in getting the feel of an electric guitar, why not try some trippy Pink Floyd, the guitar intro to “I Was Made For Loving You” by Kiss, or the solo from Bon Jovi’s “Always”?

Or if you’re feeling really brave and funky, try some fingerstyle guitar. The guitar store assistants may have a moment of panic thinking you’re whacking their guitar around, but they’re far more likely to stop, listen, and give you a nod than if you played Stairway.