That's why it’s fantastic for heavy rock and metal.

Remember Korn? They helped bring the seven-string back from the brink of extinction with “Blind” back in 1994, and that helped give rise to the nu metal movement.

Deftones too - the guitarist uses 7, 8, and 9 string guitars.

And Muse - they had some great hits using 7 strings, like this one:

7 strings are also known to be used in classical and jazz music too?  Here's a list of notable 7 string guitar performers.

Anyway, I’ve put together a lit of some of the best 7 string guitars, and I’m psyched to show you my 5 favorites.

You can get both acoustic and electric 7 string guitars, but my buying guide is going to concentrate on electric ones.

I just love the sleek black gloss look of this 7 string.  Even the hardstock is all black so it really looks the part.

It’s super affordable too - a crazy price if you ask me.

It comes from great brand Jackson, and there’s a lot to love about it. It has a nice thin neck, which Jackson is known for, so it’s really easy to play.

This is their entry level 7 string, but its sound is just as wicked as anything you’ve seen on stage. It has a 26.5” scale length, an inch longer than is normal, so you get better low-end sound. And the cutaways allow for awesome high fret access!

The compound radius fingerboard is perfect for when you’re playing fat riffs.

The body is made of poplar, which is nicely resonant with a meaty tone. Then it has a rosewood fretboard, which helps give a warmer, softer sound.

The fixed bridge design isn’t a problem, it stays out of the way when you’re playing.

Although it looks quite a beast, it’s actually quite lightweight, which is great because it means you can concentrate on your playing. And that together with the thin neck means it’s super comfortable to play.

This baby comes from the famed Ibanez brand - but this version is actually affordable.

And better yet, if you buy through Amazon, you can sometimes get a really good deal. (If you’re keen, check out the link.)

The Ibanez GRG has a solid body, (made of poplar) and this means rather than having a normal sound box, it relies on an electromagnetic pickup system to detect the vibrations of the strings.

Solid body guitars offer a slightly longer sustain than hollow body counterparts, and they can be amplified a lot louder without running into feedback issues. They’re also more responsive to effects.

Of course what I really love about this 7 string is that the Proprietary Infinity R7 humbucking pickups deliver that all important fat, distorted tone. Just what you’re looking for in a 7 string.

It has a nice thin neck, which helps make it easier to play.

I also like that it’s in white, it’s quite kitsch.

OMG - I absolutely love the look of this guitar! Stunning.

And it sounds as good as it looks too.

It comes from the well-known Schecter brand. Schecter has a decent reputation for making somewhat affordable Ibanez-like guitars.

There are 24 extra jumbo frets, and they’re standard frets rather than fanned, (I explain the difference in my buying guide later).

What I love about jumbo frets is that it’s easier to bend the note by pushing the string towards the edge of the neck while fretting. Great for playing lead guitar runs, riffs and licks and solos.

The mahogany wood back goes really well with the black cherry front. And the maple neck and rosewood fingerboard give excellent playability. The cutaways allow for awesome high fret access.

I also like how you can tweak the volume and tone control with the 3 way toggle switch.

If you’re a bit uneasy about spending this much money on a guitar (it’s more expensive than some of the other ones I’ve shown you), it might put you at ease to know that it comes complete with a lifetime guarantee.

They also have a version for left-handers.

To look at, it’s very similar to the JS Series Dinky Arch Top JS22-7 I showed you earlier.

Unfortunately, it’s not quite as affordable as the JS22-7, but once I describe it to you, you may decide it’s worth the money.

It’s basically built for metal and hard rock. It has a long, 26.5” scale, an inch longer than is normal, so you get much better low-end sound. Plus at the same time, the cutaways allow for amazing high fret access. Great contrast.

It has a thin neck profile and extra jumbo frets which make it really easy to get your fingers where you want them.

Rather than a poplar wood body, this baby has basswood instead. This is good because it tends to dampen sharp highs and soften them too.

Plus being basswood it’s quite lightweight. Basswood is usually associated with mid priced guitars like this but is sometimes used for more high end guitars too.

If you can’t tell already, I’m kinda a fan for the Schecter brand when it comes to 7 string electric guitars.

The Hellraiser C-7 is an amazing guitar. Unfortunately though, it does cost a pretty penny. In fact, if my math is right, it’s about 5 times the price of my number 1 pick, the JS Series Dinky Arch Top.

If you’re dubious about spending so much money though, take a look at the customer reviews - players just love it.

To look at it, it’s very similar to the Schecter Omen Extreme-7, with it’s black cherry solid body, and same neck profile. But there are some notable differences and that includes the wood (mahogany not basswood), and the gothic cross inlay on the fretboard.

Plus the C-7 has bigger frets. And it has a long 26.5 inch scale, which as I said earlier, is good for getting better low-end sound.

Overall I suppose the Hellraiser C-7 is the easier of the two to play, and it’s a better showpiece.

It’s available in both right and left-handed versions, though the left-handed one may be easier to get hold of.

First, here's a nice video I found that covers the 7-string basics:

Now I'll go over some other key points and common questions about 7-string guitars.

All about 7 string guitars

The standard tuning for 7 string guitars is: B E A D G B E. The high six strings are exactly the same as a regular 6 string guitar.

If you ignore the low string, it’s just like a regular six string guitar – just with a wider fretboard.

Why does that matter?

It means learning to play it is relatively easy, and anything you’ve learned to play on a six string, you can now play on a 7 string.

The big difference is of course the low B string (which makes it easy to play normal power chords across the bottom two strings).  You’ll soon get the hang of it.

What to look for in a 7 string guitar

One of the main things to think about when buying a 7 string is the shape of the neck.

Obviously a 7 string is going to have a thicker neck than a 6 string. 7 strings with thinner necks are usually a little more comfortable to play.

But if you are on the taller side, you may have bigger hands, so the size of the neck shouldn't make a difference.

My best advice is to think about what type of neck you like on a guitar and try to get something similar for your 7 string. If you like the idea of a thin neck, you might want to check out my number 2 pick, the Ibanez.

But if you think you can handle one with a thicker neck, you should check out one of the Schecter ones I showed you. Or for something in between, how about the Jackson?

What to look for in an electric guitar generally

If you’re anything like me, you might be tempted to go out and just get the exact same guitar as your favorite artist. (Or something similar.) And there’s nothing wrong with doing that if you’re confident enough that you can handle the guitar.

Since this blog post is specifically about 7 string electric guitars, I’m not going to talk too much about electric guitars generally. But what I will say is that the main 3 things to think about are the price, the look and the sound.

In terms of price, I personally think you shouldn’t get a guitar for less than $100. A guitar like that you know is going to be no good. As for your price ceiling, that’s down to you and your budget.

It’s also worth saying, factors that affect the guitar’s look also affect its sound. Like the body style and the wood.

When I’m buying a new guitar, I always like to read product and customer reviews, and get a feel for what people are saying and what they think about it.

When you’re checking out customer reviews I would try to avoid looking at the ones on manufacturer’s websites, ‘cause they usually only post the positive reviews. Instead, you should try sites like Amazon, where the reviews are more balanced

How to make your 7 string guitar sound awesome

Don’t be intimidated by the idea of playing a 7 string guitar. You don’t need to relearn guitar all over again, it’s just a simple change - the addition of the low B string.

But what makes a 7 string sound great is not so much how much you had to pay for it but, maybe moreso how you tune it.

You can have some real fun experimenting with the tuning on your 7 string. For example if you want a dropped tuning similar to what you get with Drop D on a six string guitar, you can drop the low B string to an A.

Here’s a cool video with a great example on how to tune a 7 string electric guitar:

Who makes the best 7 string guitars?

Actually, that’s probably the wrong question to ask. A better question might be “Who makes the best 7 string guitars for my budget?”

There are some great names in 7 string guitars, and usually when a new really good 7 string guitar comes out there’s always a rush to make more affordable versions, which are usually almost as good.

In my top 5 picks earlier you might have noticed that I picked ones at different prices, from about $200 all the way up to over $1000.

Is a 7 string guitar harder to play?

I suppose it can be a little bit harder, but once you’re used to it, the difference is fairly minor.

What kind of 7 string guitar you get does influence how easy it is to play. And if you’re looking for one that’s easy to play, then my recommendation is to go for one with a thin neck and large frets, or even jumbo frets.

Now, that is a good question. Hopefully in this blog post (and through the linked videos) you now have a good idea of what 7 string guitars sound like and what they’re like to play.

But if you’re not at all put off by having extra strings on your guitar, then you might want to check out my other blog post, about the best 8 string guitars.

I hope you enjoyed my reviews and buying guide about the best 7 string guitars!

If you wanna see one more 7 string guitar demo, this ones pretty good.

Overall, 7 string guitars are trickier to play than your regular 6 string variety. But if you’re up for the challenge, I say go for it! 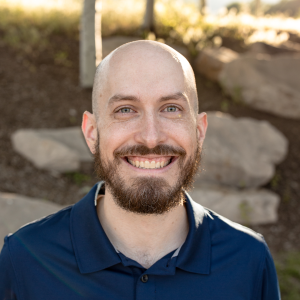 Ben is a longtime guitar player and music enthusiast. He has performed extensively and recorded professionally. He founded Strummingly to help other people experience the joy of music. 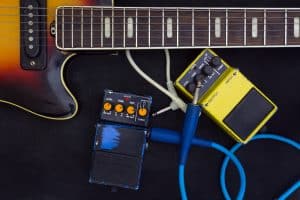 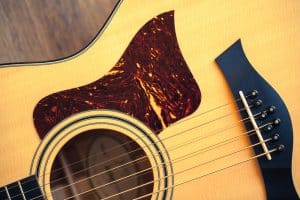 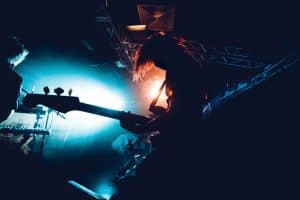 Disclaimer:  As an Amazon Associate I earn from qualifying purchases.  In other words, if you click on a link to Amazon and end up purchasing something there, I receive a small commission at no additional cost to you.